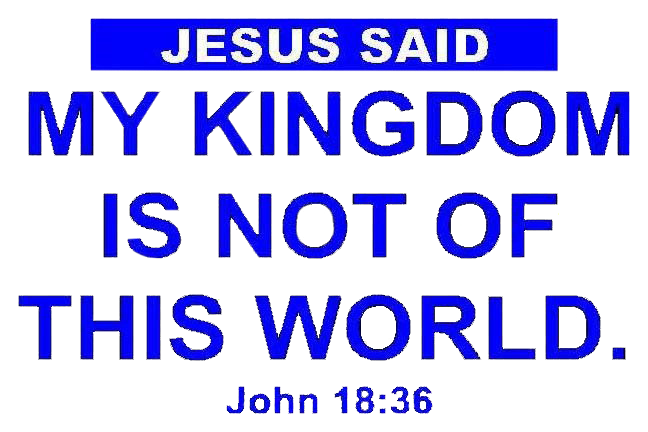 With the 4th of July soon upon us, we will see Old Glory, the Stars and Stripes, proudly displayed in all sorts of manners. It will wave majestically throughout our land from flagpoles at homes, businesses, and civic locations. It will decorate clothing, memorabilia, plates, and napkins. It will be found on the lapel of candidates and others in demonstration of their political values. As a Christian, how are we to respond to the calls and pressures of citizenry?

Some of you may read that question and ask, “Why would you even raise that question? The answer is clear.” Well, it is clear, but depending upon whom you ask. Some Christians strictly avoid politics and any semblance of national pride, and it’s not just the Amish who do this. Such Christians take very seriously Jesus’ words in the gospel of John: “My Kingdom is not of this world” [John 18:36].

There are others who wrap their faith in the flag, so that it is hard to tell where saluting flag ends and the worship of God begins. I’ve even heard it said that one can only be a good Christian by belonging to this or that political party, and I’ve heard it said about several different parties.

In response to such syncretism, Derek Webb wrote the song A King and A Kingdom in which he sings:

As Christians, our first loyalty is to the King of kings before any president or other elected official. Our citizenry belongs in the kingdom of God before what is printed in our passport, so we want to make sure that we are following Christ and obeying His Word (the Holy Bible) first and foremost. We should never compromise our faith to “toe the party line” or “vote for the lesser of two evils” in the name of compromise. Our first love is the Lord above any other.

That doesn’t mean we should be apolitical or worse apathetic. We should be good citizens of the land. Even if we see ourselves as exiles in this world, we need to be productive with our time here. In Jeremiah 29, when the people of God were living in exile in Babylon, the people were told to build homes there, prepare to live in that foreign land for a long time, and to “seek the welfare of the city to where I have sent you into exile,” says the Lord in verse 7. He says it “ for in its welfare you will find your welfare” in the remainder of that verse.

We are called into our homeland to bless it. This is one of the reasons our vocations are so important. We understand them to be God-given. As Christians, we helped to build the common good in the civic arena because that is our calling. As a church, we are called to engage our community and to bring grace upon others. That is why we provide dinner for the kids who gather here on Wednesday night and at Bible School—we share common grace with them as we eat at the table, and then we share the particular grace of Christ and His Word that nourishes our souls.

Likewise, Christians are called to care about the common good of society as well as its spiritual good. In Romans 13:1, Paul instructs, “Let every person be subject to the governing authorities. For there is no authority except from God, and those that exist have been instituted by God.” Peter says something similar in his first epistle 2:13-17. In both cases, these Apostles are calling upon God’s people to be good citizens. That does not mean blindly following those in power as we can never corrupt or compromise our calling in Christ, but it does not mean to stand idly by, deny your opportunity to vote, or to be a perpetual critic of power and politics.

As Christians, we need to be Spirit-led as we engage our culture. That means being a part of the process politically by running for office, being informed and voting responsibly, and making sure that there is a Christian perspective heard in regard to policy and plans. We need to demonstrate a willingness to serve and volunteer for the greater good.

As good citizens, let us demonstrate our faith in all things while also being civil and kind and making room for all that freedom may ring in every heart. That is good for our country, and it is good to prepare us to fully receive the kingdom of Christ.