Hymn Spotlight: Now Thank We All Our God

Upon hearing the hymn, we would never realize that this paean of praise was forged during times of tragic experiences. From some of the most severe human hardships imaginable during the Thirty Years’ War (1618-1648) came this stately hymn, often called the national “Te Deum” of Germany because it has been sun on many occasions of national rejoicing.

Martin Rinkart, born on April 23, 1586, in Eilenberg, Saxony, Germany, was the son of a poor coppersmith. He was for a time a boy chorister in the famous St. Thomas Church of Leipzig, Germany, where J. S. Bach was later musical director. There Rinkart worked his way through the University of Leipzig and was ordained to the ministry of the Lutheran Church. At the age of thirty-one he was called to be the pastor in his native town of Eilenberg. He arrived there just when the dreadful bloodshed was starting. Germany, the battleground of this conflict between warring Catholic and Protestant forces from various countries throughout Europe, was reduced to a state of misery that baffles description. The German population dwindled from sixteen million to six million. Because Eilenberg was a walled city, it became a frightfully over-crowded refuge for political and military fugitives from far and near. Throughout these war years several waves of deadly pestilence and famine swept the city as the various armies marched through the town, leaving death and destruction in their wake. The Rinkart home served as a refuge for the afflicted victims, even though it is said that Martin Rinkart often had difficulty in providing food and clothing for his own family. The plague of 1637 was particularly severe. At its height Rinkart was the only remaining minister, often conducting as many as forty to fifty funeral services daily…one being for his own wife. Yet, amazingly enough, he was a prolific writer of seven different dramatic productions on the events of the Reformation as well as a total of sixty-six hymns.

During the closing years of the war Eilenberg was overrun by invading armies on three different occasions, once by the Austrian army and twice by the Swedish army. During one of the occupations by the Swedish army, there came the demand that a large tribute payment be made by these already impoverished people. Rinkart interceded with the leaders of the army with such purpose, supported by the prayers of his people, that the tribute demand was finally reduced to a much smaller amount. It is said that when the Swedish commander would not at first consider Rinkart’s request for a lowering of the levy, the pastor turned to his humble parishioners and said, “Come, my children, we can find no mercy with man; let us take refuge with God.” On his knees Rinkart led his parishioners in prayer and in the singing of a familiar hymn. This demonstration of spiritual fervency so moved the Swedish commander that he reconsidered and finally lowered the demands of the tribute payment.

Germany is the home of Protestant church music, and no hymn, with the exception of Luther’s “A Mighty Fortress is Our God” has been used more widely in German churches than has this hymn. The fine English translation by Catherine Winkworth in 1858 has aided its popularity in the English-speaking countries as well as in Germany. This gifted English woman is also the trans-lator of another well-known German hymn, “Praise Ye the Lord, the Almighty.”

The majestic tune for this text was written by one of German’s finest and most prolific composers, Johann Crűger, whose hymnal, Praixx Pietatis Melica, published in 1644, was the outstanding German hymnal of the seventeenth century. It had forty-four editions from 1644-1731,. This tune with Rinkart’s text first appeared in the 1647 edition of that publication.

The first stanza of this hymn is a general expression of gratitude to God for His “countless gifts of Love.” The second verse is a petition for God’s continued care and keeping, with perhaps just a suggested hint of Rinkart’s own personal hardships, “Guide us when perplexed, and free us from all ills…” The final stanza is a grand doxology of praise to the Father, Son and Holy Spirit – “the one eternal God.”

Thanksgiving erupts from this stately song. It has a majesty and a resolves that few other works can match. 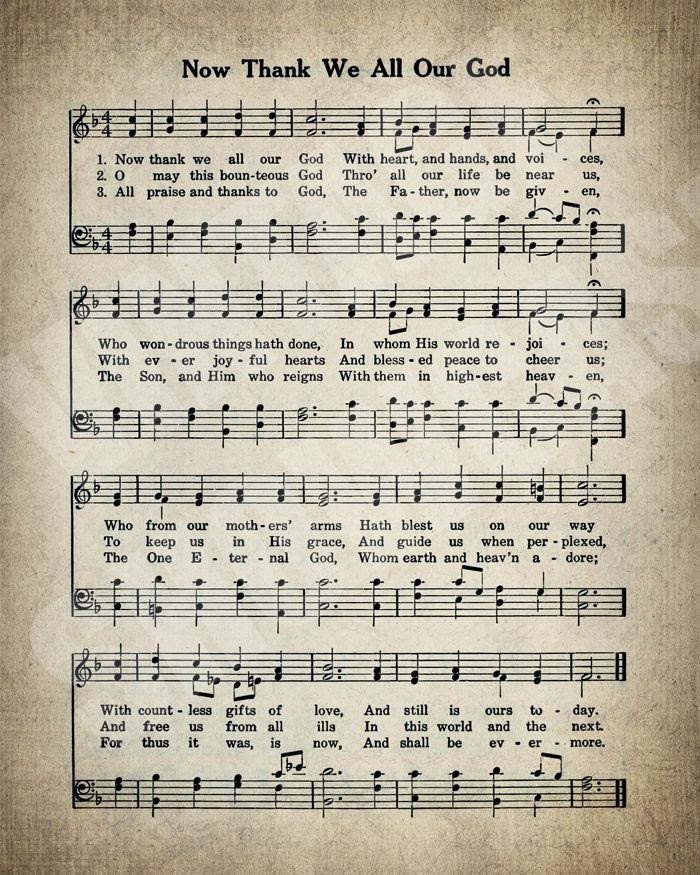